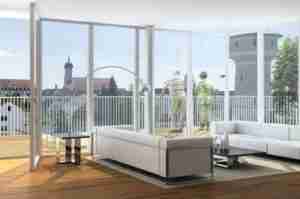 If you have your very own 'Place in the Sun' you may have wondered if there's such a thing as a heated floor mat. It's typical that holiday home heating is an ineffective afterthought, or is lacking altogether!

Those lovely cool floors are fabulous in the midday heat but can lose some of their appeal out of season, or on chilly evenings.

A RugBuddy under-rug heater is a heated floor mat which provides a discreet and economical way to heat your Villa, Apartment or Holiday Home.

Plug in electric heaters are a simple solution. But traditional types are ugly, clutter up the room, and none tackle the cold floor problem. Many, like fan heaters, are expensive to run and can make the air stuffy.

RugBuddy provides warmth where you need it - under your feet. It's hidden under the rug, taking up no space at all, and is safe, silent, and healthy.

Running costs are low. A medium size RugBuddy heated floor mat - 125x160 cm - is just 250 Watts, which is a fraction of a 3000 Watt (3kW) fan heater! RugBuddies are available in a range of sizes 80 - 600 Watts. Be sure to add a DISCOUNTED plug adapter for countries with 2-pin Schuko sockets. See RugBuddy Under Rug Heating in Germany, France, Spain, Portugal etc. 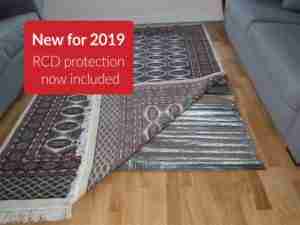 RugBuddy under-rug heaters can be used around your home. In front of the sofa, beside the bed, and under the dining table are all popular places.

As it is out of sight, RugBuddy can be left down all year round ready for use at the flick of a switch! Otherwise you can simply roll it up and pack it away.

Take a look here to see which size RugBuddy under-rug heater - heated floor mat - would suit your rug and room.

(It takes a few seconds to work out - don't click away!)

"The Rugbuddy arrived last week and is now installed in...

...our living room. We are very happy with it so far!"
Paul (Malta)

"Thank you to William who emailed me promptly. As he noted that I live in Spain, he took the initiative...

...of putting a two pin plug on the RugBuddy for me. Saved me a lot of faffing about this end with adapters etc. He also included full instructions for use so that I could prepare things before it arrived. Heater arrived before due date and missed delivery was dealt with courteously by William."
Mary (Malaga)

"We live year-round on the island of Menorca (Spain) in a house without central heating and with tiled floors....

...The RugBuddys we have in the sitting and dining rooms (both on time switches) keep the areas very comfortable – it feels just like underfloor heating! For extra heat we also have a wood burner. We have now ordered more RugBuddys for use in other areas of the house."
Rosamund (Menorca)

"We are DELIGHTED with our two RugBuddys! We live all the year round on the island of Menorca in the Med and,...

...although we don’t suffer long severe winters, for a couple of months it can get cold (3 -4 deg C), especially at night.

Our house like many others of its age, was originally built as a vacation home. It is not properly insulated and does not have full central heating. We had installed electric radiators to assist the very efficient wood burner.

Our problem was the tiled floors which were always cold and, even with rugs down, we were not comfortable. A South African friend recommended your product which they had used in South Africa and brought with them when they moved here.

Since using the RugBuddys – which we have on timers – we have warm feet and have not had to use the electric radiators at all. Despite the ambient temperature in the room sometimes being lower than usual we are much more comfortable with heat from the floor up!

For my part – being able to take my slippers off at breakfast is a real treat!! We have recommended RugBuddy to friends and I know for certain one of our neighbours ordered theirs immediately and they are also very happy! The real proof will be when we compare our electricity bills with those of previous years."

"We are very pleased with the RugBuddy and have recommended...

...it to several people and handed the information sheet on."
Richard (Menorca) January 2015

"From the number of people I have been talking to, I think that you might...more

...get a few more orders from Spain."
Robert (Costa Blanca) April 2014
COVID-19 We're A Small Family Company And Open For Business! Shipping Daily Via DHLBuy Now
+ +
Our website uses cookies so that you can place orders and we can give a better service. Continue to use the site as normal if you are happy with this. Or read our Privacy Policy for how to manage cookies.OkRead more